Thank you to our authors, sponsors, volunteers, IFOA Committee, IFOA team, Board of Directors and attendees for making IFOA 2013 such a success. We had a wonderful time and we hope you did too.

Take a look at our gallery:

“IFOA Markham: A wonderful event held at the fabulous Cornell Community Centre and Library, all beautifully orchestrated by the Markham Arts Council. I was on a panel with Dame Margaret, Lauren B. Davis, and Nicole Lundrigan (a resident of Markham, so she didn’t have to ride in the van), moderated by Lewis DeSoto. Each author was provided with a young assistant: to carry our bags, bring us water, lead us back to the green room, etc. I wanted to bring my assistant home, but his mother probably would’ve objected. There was pre-panel food and drinks, a reception where we got to chat with some of the attendees and Michael Chan, Member of Provincial Parliament  (Minister of Tourism, Culture and Sport); Markham’s mayor Frank Scarpitti arrived later and stayed for the entire reading. We really appreciated that.”

Click on the links below for reviews of IFOA Markham 2013:

Do you feel a sense of responsibility in basing your story around your grandmother? Was it difficult for you to give yourself creative freedom?

Creative freedom was a challenge at first. My grandmother’s story had been so prominent in my mind for so long it was difficult to let go of the facts in order to fictionalize. Unless I could do that, the straight story wouldn’t have been sufficiently interesting to sustain a book-length manuscript. Then I realized that the point of the novel was not my grandmother’s specific story. Her story was a metonym for all the generations of women whose destinies were determined by fathers, husbands, and in-laws; not just Chinese women, but women of any culture whose lives are not their own.

I felt a responsibility and it was to be true to the era rather than to the character inspired by my grandmother. The era we live in shapes us. During the 1920’s, the Qing Dynasty had just fallen, China was a republic officially, but big chunks of the country were still ruled by warlords, there was civil war simmering between the Nationalists and the Communists. Women glimpsed what life was like in the West, some families allowed daughters to work and others didn’t. I don’t think a historic novel can do a good job of portraying characters without giving the reader a strong sense of the time, place, and values that constrained the characters’ decisions.

Some critics say that authors who are active on social media take away from the ‘allure’ of their literary personas. Others say it is necessary for authors to have an online presence. What’s your view on the subject?

Allure? That’s too funny. I have it on good authority that when authors are in the thrall of the muse, a good percentage of us are in PJs and house slippers until two in the afternoon. Not very alluring!

For “literary persona”, I try to be as authentic as I can on blogs and social media because if you aren’t, it shows. I began using social media a year before my book came out, and some of the readers who have been really supportive of my writing career connected on social media before I even had an agent. And they’re the ones who’ve made the effort to write reviews. It’s under your control how much to share with the public domain. Social media-savvy readers understand there are limits because of privacy issues. Everyone has to be careful online.

I’d rather be writing than tweeting, but it’s undeniable that social media and blogging have empowered authors by providing a direct connection to readers. Your platform is no longer wholly controlled by what your publishing house does or doesn’t do for you. By using social media, an author can amplify the publisher’s marketing efforts and vice versa; these days book promotion is a partnership. Also, social media is a two-way street: authors can use it for discovery, to follow sites, blogs, or people with good content, and learn a lot about what’s happening in the industry. Publishing is changing at so many different levels. You can’t keep up with everything, but I find that with social media I have some inkling of what’s going on.

As a writer exploring ancestral and cultural history, do you feel that your community puts pressure on you to ‘represent’ them in a certain light- and if so, how do you deal with that pressure?

I haven’t encountered any, but I’ll let you know after I’ve given my talk at literAsian, which is being hosted by the Asian Canadian Writers Workshop. Anyway, whatever pressure any community brings to bear couldn’t be worse than the pressure my parents put on me to marry a Chinese dentist. Oh wait, did I just perpetrate a stereotype?

In relation that question, do you feel that you are a victim of ‘tokenism’ and appropriation because you’re exploring your cultural history/ancestry?

Not at all. One of the themes my novel explores is how people conduct their lives during times of change. I think that women and men faced with social change are always negotiating a balance between cultural heritage and personal ambitions. They could be living in their own country as it embraces new values or in a society of immigrants seeking to assimilate.  The setting of Three Souls or any book about transitions may be specific but the message and story are global.

In Canada and especially in Vancouver, we have so many Canadians of Chinese or part-Chinese ancestry who were born and raised here. These readers want to learn more about their cultural heritage, and sometimes it’s through fiction. Not every family has managed to hold on to family stories because so many are passed down through oral tradition, all it takes is one broken link in the chain and a story is lost forever. It’s really encouraging to think that a book I wrote to honour my grandmother might help young adults of Chinese descent understand the influences that shaped their great-grandparents.

What has been the highlight of your literary journey thus far?

It was definitely the day HarperCollins Canada made the pre-emptive offer for Three Souls. I got off the phone with my agent and said to my husband, “It’s really happening!” Everything since has been the icing on the cake, but that was the cake. No cake, no icing.

What are you most looking forward to about IFOA Markham?

Just about everything! I want to meet the person(s) behind all the fabulous social media you’ve organized, and I think the all-female authors panel is going to be fun – a great idea.

We’re looking forward to meeting you too!

Redefining Literary Spaces and Places:
An Exhibition in conjunction with IFOA Markham 2013
Curated by Samantha Rodin 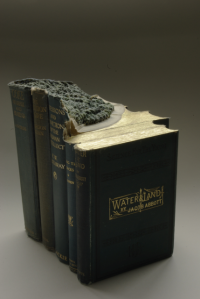 The human relationship to literature has dramatically changed through the industrial and technological revolutions. How people access recorded knowledge has transformed from a place-based experience to a more ephemeral occurrence. Libraries have been forced to adapt from an information warehouse to a diverse community space as eBooks mobilize literature and make it available virtually anywhere. 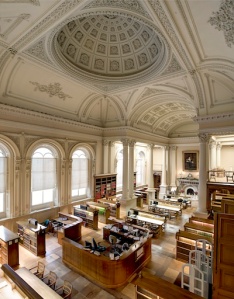 This exhibition explores a reaction to the simultaneous progression and regression of peoples’ relationship with both physical and conceptual literary experiences. Guy Laramée articulates that his work “… originates from the very idea that ultimate knowledge could very well be an erosion instead of an accumulation.” In Libraria, Elaine Chan-Dow poses the question “what do you think would happen if libraries no longer existed?” 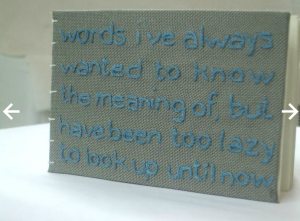 We love our book clubs!  We want to support reading, literacy and literature in Markham, and we believe that book clubs are a wonderful way to engage with books and create communities of reading.

If you are interested in buying tickets to IFOA Markham 2013 and belong to a book club, we are offering a special rate.

Purchase 10 tickets through your book club and each ticket will receive $5.00 off reception tickets ($50.00 without discount). This ticket includes delicious food, readings, book signings and a curated literary art exhibit.

Also, if your book club happens to be reading IFOA Markham Author Janie Chang’s Three Souls, click here for some engaging, fascinating questions to discuss at your next book club meeting. 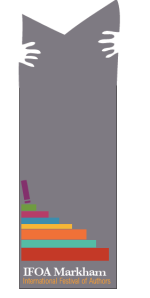 Fall is an exciting time for us- we put away shorts and pull out the sweaters, sip on hot coffee instead of lemonade, enjoy the changing colours of leaves instead of the scent of blossoming flowers.

For us, it also means that IFOA is around the corner, and that we have to catch up on our reading! We are thrilled to have an incredible lineup of authors for the third annual International Festival of Authors Markham.

We hope you’ll join us in celebrating all things literary this fall.